Located just outside of Whittlesea, less than an hour’s drive away from the Melbourne city centre, lies the Yan Yean Cemetery in all its idyllic splendour. Tucked among rolling green hills, this serene place of rest spans ten acres and a further 14 acres in development with over 8500 interments on the grounds.

Very much a functioning cemetery and integral part of the community’s legacy, the cemetery’s history began back in 1850: while the Yan Yean Reservoir embankment was being constructed, a labourer employed by contractor Joseph Martindale passed on. His body was laid to rest in the space that was soon to become the cemetery we know today. Officially, however, the first headstone, belonging to William Johnston, was constructed in 1858 and can be found nestled between a two-trunked oak tree in Compartment 2 of the cemetery.

The land that Yan Yean Cemetery sits on today was owned by one Dr. William Ronald who generously donated the ten tranquil acres for its use. Soon afterwards, in 1854, the first Trust Members were appointed – George Sherwin, Dr. William Ronald himself, and David Johnston. Thomas Hughes, John Gibson, and James Ryan were appointed later, in 1865. Five years later, in 1870, an addition was made to the cemetery in the form of a Sexton’s Lodge, following the employment of a Sexton with the purpose of revising the Interment Register – the same Sexton who designed the lodge. Today, the cemetery is growing rather rapidly, catering to the outer suburbs growth corridor of Melbourne.

As a large, established cemetery which has been fairly well-organised from its very inception, Yan Yean Cemetery presented a unique situation for us at Chronicle. While we usually engage in managing a cemetery’s records, this wasn’t the case at Yan Yean Cemetery – they were happily using another software, for their cemetery records platform! At this point, they were looking for a simple cemetery software to integrate with their existing database, instead of replacing it.

Marisa Ricardi, current administration manager of Yan Yean Cemetery is experienced in dealing with an institution of this magnitude. She previously worked at Box Hill Cemetery, another large cemetery in Melbourne, engaging with some of the foremost talents and software available. When she moved to Yan Yean Cemetery, she and the Trust decided that Chronicle was the best choice for her and the cemetery’s goals. 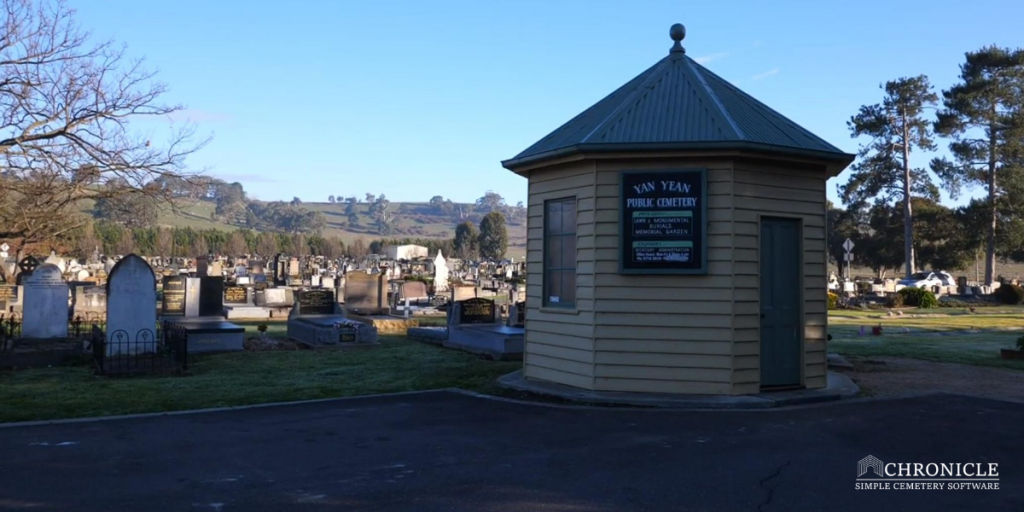 Since Yan Yean Cemetery did not require their records to be managed with Chronicle, what services did they require? Yan Yean Cemetery needed a solution that simplifies the visualising and management of their assets (burial plots). They required Chronicle’s services in creating an online cemetery search (burial and plot search). Pre-Chronicle, they only had a PDF version of the cemetery map available on their website. This was far from anything interactive, and made it considerably difficult for people who wanted to visit the cemetery or purchase plots. Pre-Chronicle, the cemetery used an Excel grid for their map – a very challenging medium with which to work. The truth is, Excel grid maps do not represent reality. When compared to the aerial view of the cemetery, the discrepancies are immediately recognised. Even though Yan Yean Cemetery’s grid map was well-maintained, it only really made sense to the staff who worked with it frequently.

The end goal? Yan Yean Cemetery wanted to drastically improve and streamline the way that they can visualise their assets and carry out burial searches. Marisa sought to have a clear picture of the cemetery’s plots, know at a glance who is buried where, what assets (plots) are available, and where they could inter new burials to come. She also wanted the public to be able to access and conduct deceased searches themselves through an online portal.

The first step in reaching Marisa’s and Yan Yean Cemetery goals was to create a digital interactive map. In doing so, Chronicle would be able to simplify the plot search capability for both the cemetery manager and other users. 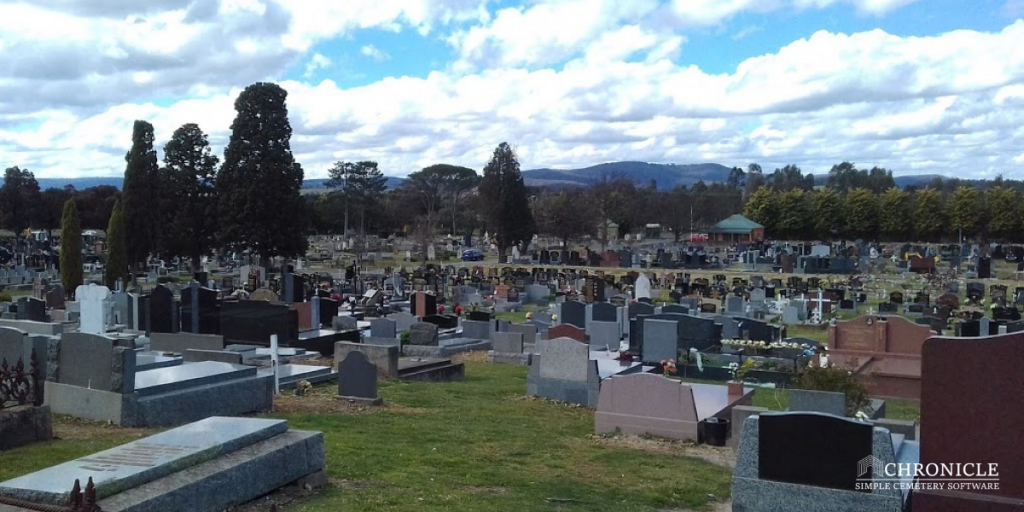 Plot measurements, alignments and mapping accuracy was the primary concern. The Chronicle team’s biggest challenge was relating the Excel plot grid to the aerial imagery and ensuring all plot IDs are consistent with the database.  After drawing 24.000 plots for Yan Yean Cemetery, we built a live integration with the previous software database, allowing the online Chronicle map to instantly reflect any changes to the records made by the admin team. During this process, there were many diagrams that needed to be moved and realigned. We had to do a fair amount of renumbering, too, and an update of the plot IDs so as to ensure they are accurate.

A survey of the cemetery had not been done previously, so mapping Yan Yean Cemetery required careful comparison with the Excel plot map on our side. As would be expected, this necessitated numerous discussions with Marisa to make sure that everything remained accurate.

How Cemetery Mapping Software Helps an Institution to Shine

After engaging with Chronicle to update Yan Yean Cemetery’s mapping software, Marisa is now able to make offline edits to the map and can request updates from the Chronicle team whenever necessary. The ability to constantly improve upon cemetery records and mapping accuracy is a constant, active process – as is the case with any cemetery digitisation project. Chronicle offers these tools to cemetery managers. It’s not always possible to rectify errors right from the start. When compared to Excel, if you’re to rectify an error in one file, this fix doesn’t necessarily carry over to other related files. Great cemetery mapping software alleviates this unnecessary workload and ensures that annotations are uniform – able to be understood intuitively by the next person. 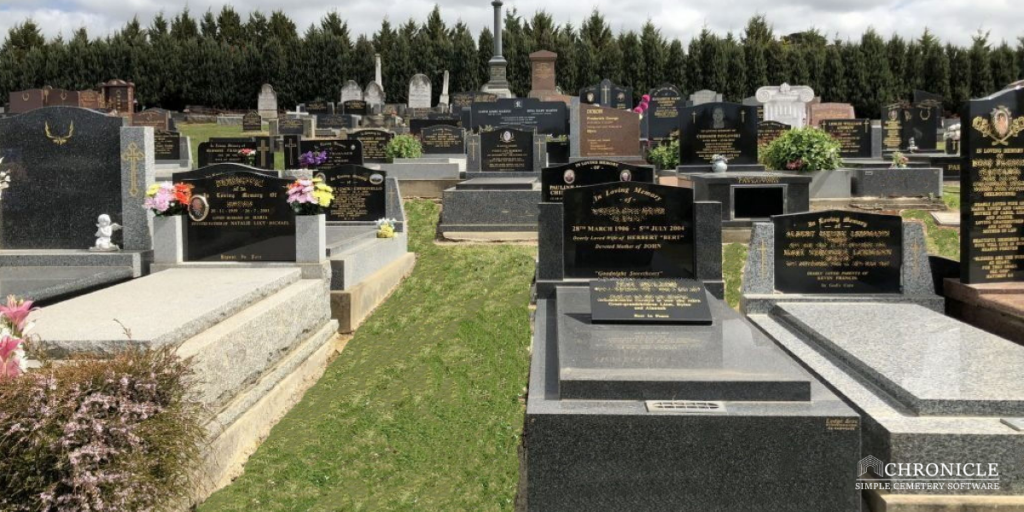 For a professional organisation like Yan Yean Cemetery, their management team deserves the ease-of-use and error-reducing software that Chronicle provides. It’s due to their organised and disciplined ethos that our team was able to help them achieve their goals relatively quickly. The project took approximately 45 days! In comparison, when working with previous clients, we spent two months before being able to confidently get started on drawing their cemetery map.

Our quick work with Yan Yean Cemetery is testament to quick communication between our CEO, Matt Borowski, and the analyst, as well as the team’s speed in creating an accurate plot map platform. Even though Yan Yean Cemetery already had an organised database, it wasn’t visible for visitors or anyone but the cemetery’s management team. The Chronicle team has helped to unveil the many stellar features of the institution through an aesthetically-pleasing, accurate, and intuitive interactive map. We can help you visualise and share your records, no matter the current status. Book a free consultation now to find out how.