The Archdiocese of Hobart – 47 Cemeteries, Now Online in 1 Platform In Tasmania, Australia, the Catholic Archdiocese of Hobart oversees the processes and management of 47 Catholic cemeteries with approximately 11,000 plots in total. Although some of these cemeteries only consist of a smaller number of graves, at least 32 of these cemeteries are larger multiple plot sets, preserving rich community histories. Many cemetery administrators may read this and raise an eyebrow if they’re familiar with the more traditional, manual methods of cemetery management and how they’ve been carried out over the years.

Even though digital tools like Excel spreadsheets have made the process simpler, the cemeteries under this 133-year-old Archdiocese have been around for long enough that paper records and maps were the order of the day for most of its lifespan. A noteworthy lifespan it’s been, too – under the Catholic Archdiocese of Hobart, St. John the Evangelist Church in Richmond holds the title of the oldest operating church in the country. Becoming the Archdiocese of Hobart in 1888, it was previously known as the Diocese of Hobart as of 22 April, 1842. Burials, however, were performed even prior to the formation of the Diocese – since the early 1800s.

Rev. William John Dunne’s resting place at Colebrook St. Patrick’s Cemetery (click to visit) is one of particular importance. An influential player in Australian Catholic history, Dunne was based in Richmond for a time – at St. John the Evangelist Church, before his move and appointment as the first Catholic archdeacon of Tasmania. At his final resting place, a monument to Dunne was erected,  inspired by the works of Augustus Pugin, English architect credited with pioneering Gothic Revival architecture. Pugin, in fact, was a good friend of the Archdiocese’s first Bishop Robert Wilson, the latter of whom was the driving force behind Pugin-designed churches – and, possibly, headstones – in Tasmania. Maintaining a coherent and uniform cemetery management process for just one cemetery over the years would be a task in itself. Here, 36 parishes saw a turnover in personnel and process changes regularly, leading to irregular record keeping and making it difficult for the Archdiocese to make sense of records. After going digital, this changed – headstone photos can now be taken directly on Chronicle’s digital cemetery platform, on-site, instantly synchronising with the records on one, unified database.

A Spirit of Progress

It could be seen as inspiring that the Archdiocese embraced digital progress in helping to preserve the history of the Church and the legacies of its 27 attached parish communities. While the Archdiocese is known to provide social services through initiatives like CatholicCare that serves both the Catholic and broader communities, the legacy of those passed, buried beneath headstones across their cemeteries has been somewhat inaccessible to the communities they serve – until now.

The story of moving ahead to serve both customers and community more easily with reliable, accurate data is one that can serve to motivate other similar communities to do the same. It also serves as a shining example of how intention and will is a powerful force against what some may call insurmountable odds. The ever-helpful, forward-thinking Paul Taranto, Director of Corporate Service at the Catholic  Archdiocese of Hobart, collaborated closely with the Chronicle team to put their cemeteries on the map – literally and digitally. It’s Paul’s belief that digitising Tasmanian cemetery records is an important step in preserving information and enabling better site management.

How did Paul reach that goal? With the help of Chronicle, he endeavoured to digitise the Archdiocese’s cemetery plot maps and preserve the community’s records for the cemetery and wider society.

Out of One, Many - How One Cemetery Created a Movement

How did Paul find out about Chronicle, in the first place? The beginning of the tale can be considered serendipitous in some way. Some may call it kismet. Others may say that the Chronicle team’s past efforts have proven fruitful and their work speaks for itself. We won’t say which we’re partial to.

For Paul and Chronicle, the journey began with Fingal Catholic Cemetery in mid-2020. The cemetery had records but no plot map, so Paul did a bit of research online and tried to find a platform that could create a digital map or cemetery mapping software. He had some idea of what he wanted, mainly due to the Tasmanian Government’s new legislation within the Burial and Cremations Act of 2019. The Act requires cemeteries to have records relating to burials along with an application process and a map available to make it easy for people to find their way.

Paul digitally stumbled across Chronicle on a US website. When he did further digging, he was, admittedly, glad to know that Chronicle is an Australian company based in the country, although that wasn’t what he was necessarily looking for. For Paul, the ability to have Fingal Catholic Cemetery visually represented was important. He quickly found that Chronicle ticked a number of boxes – the ability to access cemetery records remotely and view headstones, having a cemetery plan combined with aerial imaging aligned with his contemporary vision of where he’d like to take the cemetery.

The idea of working with a simple, unified platform like Chronicle was a solution for Paul in avoiding disastrous consequences of losing records and histories due to parish secretaries and priests changing with time. Paul explained that the only way to find what they were looking for at the cemetery was to drive out and physically look for plots – even with the maps that they did have to work with. Clearly, this presented a logistic problem that takes up valuable time – it’s the cost of inaccurate mapping and working with old records in 60- or 70-year-old books that changed hands, sitting in fire safes.

After Fingal Catholic Cemetery went digital, complete with its intuitive user interface, stunning mapping with colour-coded plots, and easily-accessible records stored safely in the cloud, Paul saw the numerous advantages of the Chronicle platform and how it could benefit the rest of the cemeteries under the Archdiocese. An individual who has worked in various different sectors, he explained that a platform like Chronicle is the only logical solution in cemetery database software. Moreover, an industry like cemetery management often comprises aged volunteers who are often tentative about new technology, so an intuitive software platform is a must. Additionally, the process to find distant relatives interred at cemeteries is quite involved for members of the community. It was quickly apparent that Chronicle changed that for the better.

“Was it difficult to convince management to digitise all the other cemeteries under the Archdiocese on the Chronicle platform?“

According to Paul, it wasn’t a hard sell. The software is not only easy to use – Paul found it really simple to demonstrate its capabilities to the management team, as well.

That’s when the scope of the project changed and the Chronicle team was tasked with another 31 cemeteries to digitise. A large scale project, indeed, but it was one that they worked through systematically.

More about digitising your cemetery 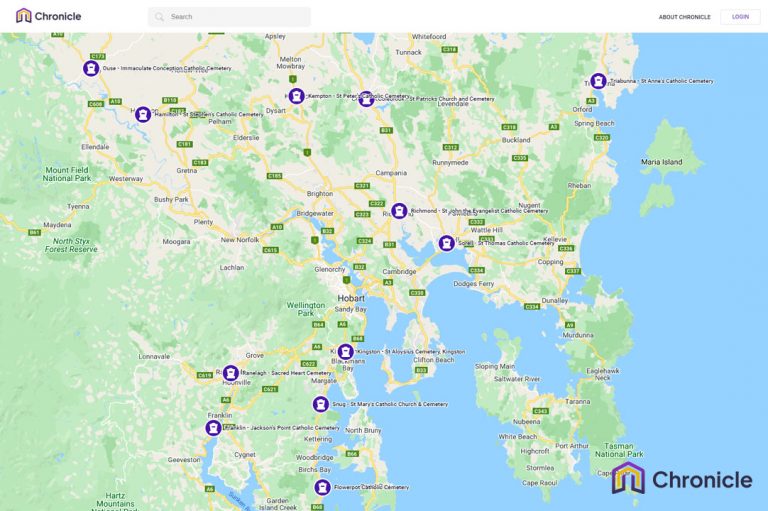 Often, one of the first steps in digitisation is a field drone survey. This helps us achieve a birds-eye image at incredible 2cm resolution. It gives us a clear view for mapping purposes, not only of monuments, upward-facing plaques, headstones, and fresh flowers, but also of any ground disturbance within the last 30 years or more.

Using a drone survey is highly advantageous – even if the cemetery’s original maps are not available, the team is still able to create an accurate cemetery plot diagram. When Chronicle worked with the small parish cemeteries at the Catholic  Archdiocese of Hobart, most were unable to supply maps or hand-drawn diagram plans. The drone survey method, then, allowed the Chronicle team to accurately determine burial spaces and layout with the acquired aerial mapping cemetery. After mapping over 150 cemeteries, this is a regular process at Chronicle, making the team the leading experts in cemetery mapping.

How to Map Cemeteries Without Plot Diagram

Where these resources were not supplied the team had to rely on aerial images alone to draw plots. To ensure accuracy in cases like this, the mapping team identified a plot using monuments of headstones that were visible from the aerial imagery acquired. Unmarked graves make this process a little more difficult,

In the case of St. John’s the Evangelist Catholic Cemetery, for example, hand drawn plot maps were provided, while St. Augustine’s Catholic Cemetery provided the team with grid plot maps that were created digitally. In digitising these plots, the team had to work with the formats used by their respective cemetery managers. Plot ID is a foundational element in keeping accurate maps and records on Chronicle as it serves as a marker to distinguish between each individual plot.

Additionally, the team needs to understand the network or rows and sections of each cemetery, comparing them to the diagrams and location of the plots in the Excel records.

Once mapping and populating the database was complete, the GIS (geographic information system) relationship was created in each digital cemetery. This means that the newly-created digital map and clean Excel records are matched and connected, where plot data is reflected on the GIS map for a complete cemetery mapping platform.

The Archdiocese of Hobart is now able to preserve information and work with better site management via the digitisation of Tasmania’s cemetery records. Paul explains that once it’s set up, the management and updating of plots and records is simple.

“Half a dozen clicks and you’ve updated the record,” he explains, adding that it literally takes only two minutes to do so. Due to the simplicity and power of the system, Paul is also happy to know that two different families won’t have to compete for the same plot, as has been known to occur in the past, since certificates are instantly available. With his first-hand experience, he touts the software as reliable, stable, and even exciting to use. If help was needed, Paul finds that Chronicle’s support team gets results. Some small issues might have taken a while to sort out, but Chronicle’s Andi gets the job done quickly.

Now, the Tasmanian community is able to learn about and share their community legacy or reserve a plot or service, while their cemetery managers are able to work with an online process accessible from anywhere, without the need to open old books and paper maps. Stories of deceased community members can be added easily to their digital burial plot, as the William Dunne Monument at Colebrook Cemetery so wonderfully illustrates. If you want to know more about managing multiple cemeteries under one management tool, click here to discuss the tailored steps with our digital cemetery consultants.